The Documentary Film Program at Prague Film School aims at creating the independent documentary filmmaker. Through intensive practical and theoretical work, each student learns how to adapt the narrative tools of drama to tell truthful stories about the real world that simultaneously entertain, educate and inspire audiences. The course is designed to develop professional-level production and post production skills.

Students completing the program are guaranteed to have acquired skills in working with Avid Media Composer editing software, DaVinci color correction, ProTools sound design and After Effects special effects programs. They will know how to operate the Black Magic Pocket, Sony 4K HDCam, Red Epic Dragon and Arri Alexa cameras. They will be proficient in recording with portable mixers, directional, shotgun, omni and wireless microphones, and knowledgeable of how to light using a wide range of lights, from 100 W Dedolights to 4K HMIs.

Creates the Self-Sufficient and Versatile Filmmaker

Students graduating from the course will have the technical skills to fulfill all key positions on a film set and be able to singlehandedly write, produce and edit their own works.

Living in Prague, a city with a tumultuous past (WWII, communism, etc.), students have access to a wealth of local historical, social and cultural subjects.

The Prague Film School Documentary Filmmaking Program offers the additional advantage of being a boutique course – run with a small and selective group of students paired up with top academics and documentary professionals.

The type of student who chooses Prague Film School comes to us because he or she has essentially only one year in terms of time or financial resources to cross from where he or she is in life at the moment into the world of professional filmmaking. We then have only one year to bring these students to a level of competence where they can operate professionally. As such the program is highly squeezed.

What does the program offer?

How will the program help filmmakers get into the industry? 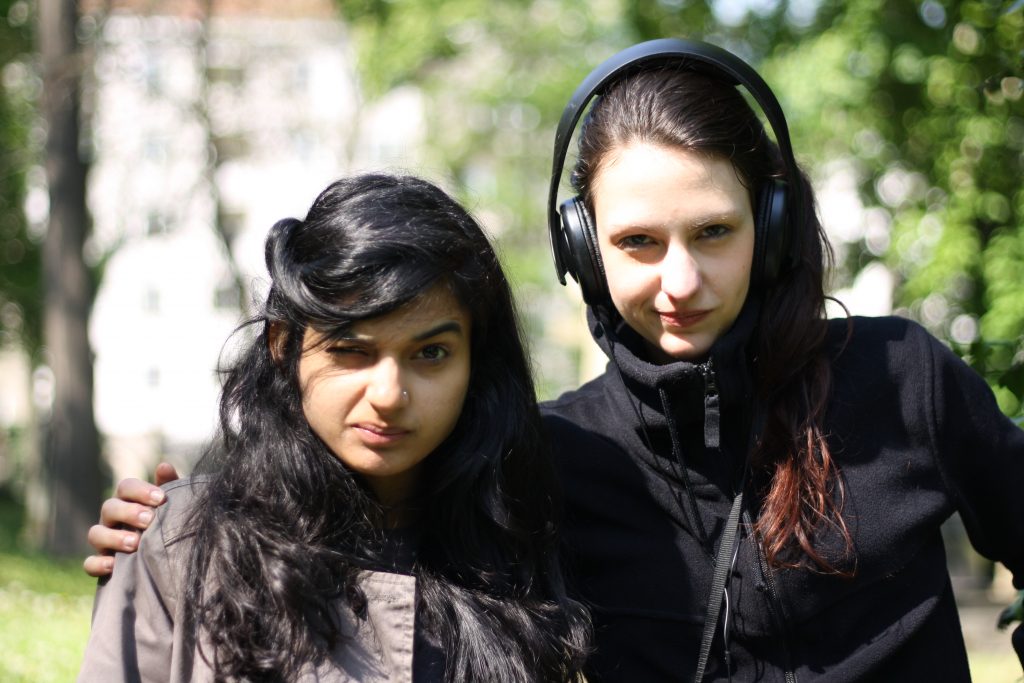 Students entering the Prague Film School documentary program typically come socially-minded, prepared to tell truth to power and already sensitized to the infinite number of fascinating stories embedded in real life around us.  The documentary program gives its students the skills to tell these stories –structurally, aesthetically and technically.

Caitlin Mae Burke (2005) pursued a career producing and directing non-fiction and reality television in the United States after her time at PFS. The feature films she went on to produce (both documentary and scripted) have won Emmy, Grand Clio, and Gotham Awards, and been nominated for Independent Spirit Awards and Cinema Eye Honors, as well as being broadcast and shown theatrically worldwide. She is an inaugural inductee into DOC NYC's 40 Under 40 and a 2018 alumna of Berlinale Talents.

Anne Svejgård Lund (2011) was accepted Britain’s prestigious National Film School largely based on her work at Prague Film School.  She was in the production of The Russian Woodpecker, winner of the Grand Jury Prize at Sundance in 2015.  She is currently in production with her own feature documentary Deepali shot in India and produced in Denmark and the UK. In 2020 Anne completed Big Dreams in a Small Place,  a poetic documentary telling the story of young women in a small community dreaming of becoming the majorette and leading the march in the traditional marching band.

Dieter Auner (2006) distributed his first acclaimed documentary feature, Leaving Transylvania, the year following his graduation in 2006. His second feature, Off the Beaten Track, was nominated for Best Documentary at the 2012 IFTA awards. His third feature, Dreams of a Clown, was distributed by EastWest Film Distribution. The skills Dieter picked up in Prague have enabled him to work today as a DP, camera operator and editor on fiction and non fiction films alike.

Omid Marzban (2010) directed the documentary Rebel Beats a few years following graduation at Prague Film School.  The film tells the story of a young female rapper in Afghanistan and was screened at One World Human Rights International Festival. Omid works as a video journalist at Radio Free Europe.

The Documentary Production Program at Prague Film School emphasizes storytelling. Through intensive practical and theoretical work, each student at PFS develops his/her voice as a documentary storyteller and learns the techniques to grab the audience and take them on an emotional journey.

Students crew on each others’ assignments, gaining extensive practice in directing, producing, shooting, and recording sound. Rigorous critiques are a vital component of the course. In addition to these exercises, each student will produce and direct a 10-minute documentary short film on a subject of his/her own choosing, and crew on his/her classmates’ projects.

Specialized courses in Editing and Cinematography are the other key components of the program. Students learn to edit on Avid Media Composer and learn shooting and lighting theory across a range of formats.

Supplementing the practical component of the course, the documentary program will draw upon a rich pool of international and historical documentaries crossing themes and genres providing the student with a varied palette of documentary styles, techniques and approaches they can apply to their own work.

In the second semester, we focus on in-depth development and pre-production of the diploma film. Students complete weekly assignments for instructor and peer review, and learn to write a compelling Proposal & Treatment. Each student produces and directs his/her diploma documentary film and crews on classmates’ projects. Through extensive brainstorming and pitching sessions, students also leave the course armed with a portfolio of critiqued project ideas to further develop and make a reality after completion of the program. 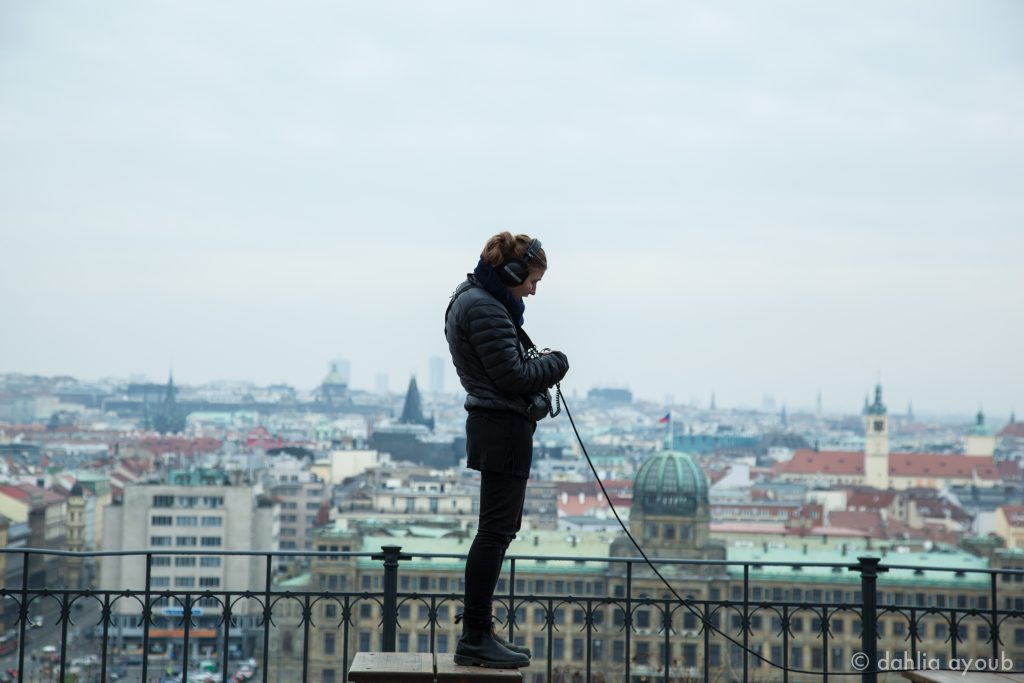 The first semester curriculum of documentary filmmaking program covers foundation courses including: (1) documentary theory / history (2) documentary workshop (3) cinematography, (4) editing and (5) documentary industry, in addition to a number of other subjects which can be taken as electives (see below).

The semester documentary film progam is the first semester of the year documentary course. The curriculum is aimed at imparting technical hard skills through weekly filmmaking projects and a solid knowledge of the discipline through a rigorous examination of important documentary works throughout history and from around the world.

Film and practical exercises play an extremely important role in the program. Classroom-based courses are supplemented with a number of practical exercises in the studio and at different locations. In the first semester, each student completes seven film projects. 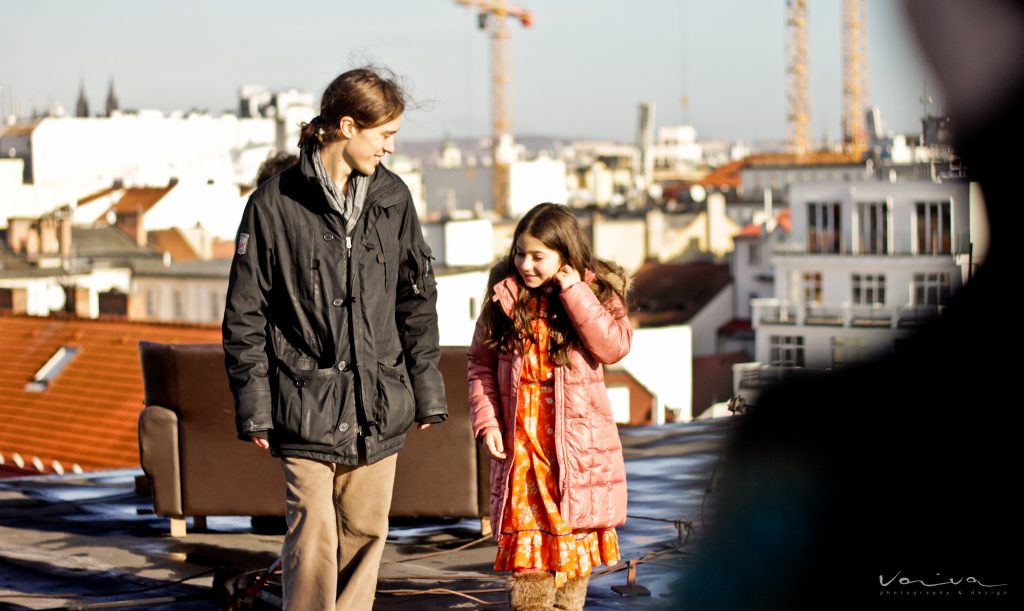 The first semester curriculum of documentary filmmaking program covers foundation courses including: (1) documentary theory / history (2) documentary workshop (3) cinematography, (4) editing and (5) documentary industry, in addition to a number of other subjects which can be taken as electives (see below). 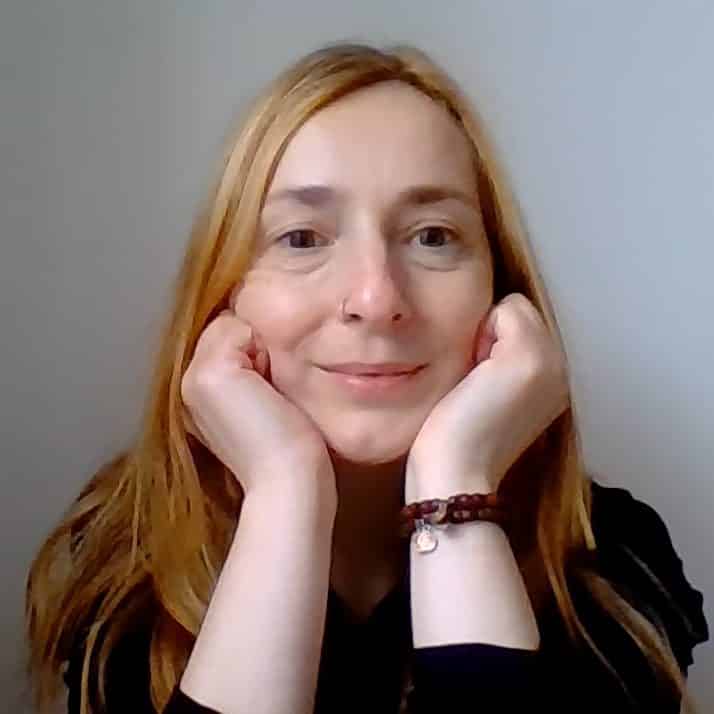 Masa Hilcisin is a visual artist, educator, and creative arts therapist. Her documentary films and experimental videos have been screened at many film festivals around the world. She teaches film production, creative video, and other forms of visual art at various schools and universities, and holds PhD In Film Studies and Audio-Visual Culture from the Masaryk University. Masa has been involved in many cultural and artistic projects, including film festival curating and various women artists’ support initiatives. For several years, she has been running visual personal storytelling workshops in Czech Republic, Georgia, Mexico, and India. 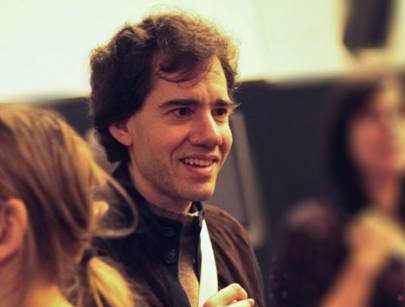 Gabriel M. Paletz, Ph.D (Screenwriting, Documentary, Film Comedy and Learning from Bad Films), with a BA from Yale University, is the first PhD graduate from the University of Southern California in film history, theory and film production. Dr. Paletz has taught film at the College of William and Mary, Duke University and USC. He has published numerous scholarly essays and articles, as well as pieces in popular journals like Variety. He has served on several film festival juries and as both historical consultant on the film Serena starring Bradley Cooper and Jennifer Lawrence, and as visual storytelling consultant to the Ethiopian Aids Resource Center in Addis Ababa. He has just completed a book that reveals the connections between the multi-media innovations in the career of Orson Welles. As a film programmer, his recent series include "The Cinema of the Absurd," with new restorations from nine Eastern European national film archives, that has played in both Hong Kong and the U.S. National Gallery of Art, and "Creators of the Photoplay," a series dedicated to the great women screenwriters of Hollywood silent cinema. 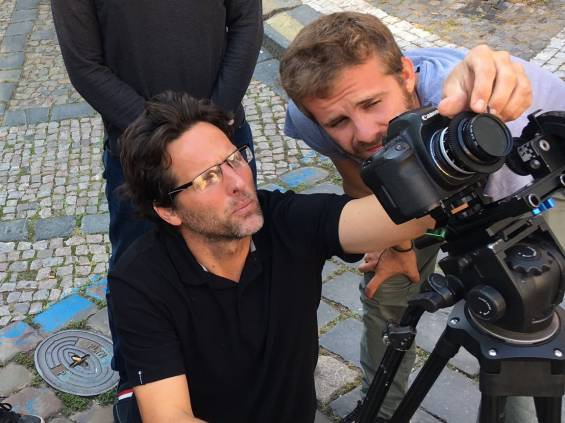 Thomas Krivy, son of Czech parents and brought up and raised in Germany, gained experience as a camera assistant in Berlin and at the Babelsberg Studios before earning his MA in cinematography from the Czech national film academy. He regularly works on narrative feature films, commercials, documentaries and music videos. 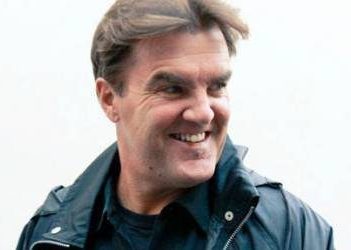 Robert Gottman is a master Avid instructor with 10 years of experience teaching editing at the university level. He served as editor at NBC, KRON TV, KICU TV and KNTV. He has edited multiple award-winning news stories and specials. 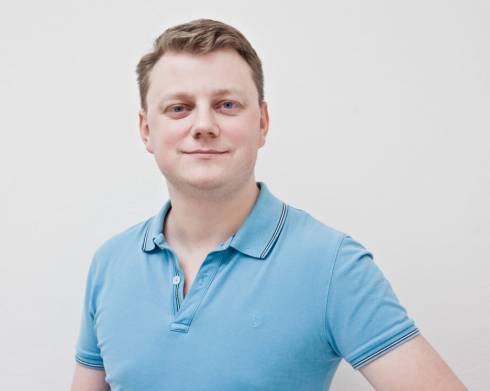 Steve Reverand is a French-born and now Czech-based producer, graduate from Prague Film School. He co-founded in 2012 in Prague the production company "The LAB". Steve has been developing, producing and post-producing international fiction projects from short to feature films, with a focus on European-based hybrid genre narratives that can tap into a niche worldwide audience. Among the successful short film he produced are Kaveh Daneshmand's Occasional Showers (Best Short Film - Iranian Society of Film Critics’ Awards, 2016), Nicole Goode's Supine (Silver Méliès Winner 2019) and Rusty Lake: Paradox (6m views online). In 2020, he produced for The LAB his debut feature project as a film producer, the queer fantasy film Playdurizm (winner of the Jury Prize for Best Feature Film at LUFF 2020 and distributed internationally). 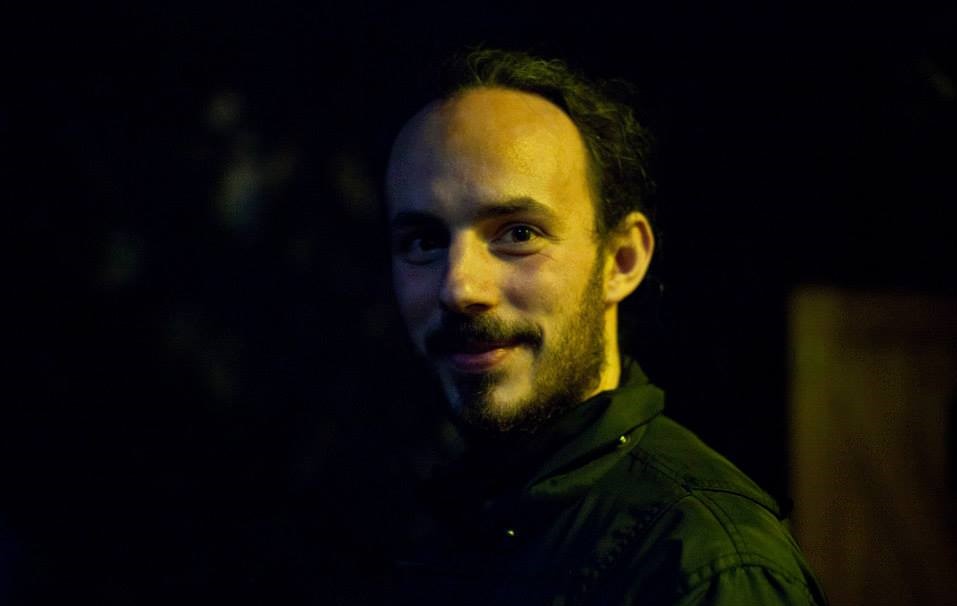 Luka Knezevic is a PhD candidate in film studies at the University of Zagreb and manages the post production facilities at Prague Film School. He is a graduate of Prague Film School (2012) and is an active writer/director. His latest short, Pressure Point, was completed in 2018 and screened at several international festivals (Myrtle Beach, TIFF Oda)